Some information about me: 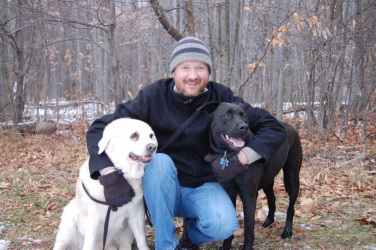 I teach music theory and composition at the Crane School of Music, SUNY Potsdam. I play percussion/drums in chamber settings as well as with the Northern Symphonic Winds and the Orchestra of Northern New York. I live in Potsdam with my wife, mezzo soprano Lorraine Yaros Sullivan, and our animal companions.

A more formal bio:
​
Tim Sullivan's compositions have received performances via the Colorado Symphony, American Opera Projects, 2018 and 2008 NASA conference, ALEA III, Etcetera Festival of New Music, World Saxophone Congress XIII, Society of Composers conferences, and the University of Nebraska New Music Festival. He has received honors and awards from ACO/Earshot, Minnesota Orchestra, ASCAP, ALEA III, and Downbeat magazine. Also an accomplished jazz drummer, he has several recordings as a member of the Boulder Creative Music Ensemble, and has performed with Ron Miles at jazz festivals throughout the U.S. He has presented his theoretical research at several international conferences, and has published analytical essays on the music of Alfred Schnittke and Galina Ustvolskaya.